Marilyn Reed was mothering three children on her own in 1977 when she first learned about Islam.

“My life was a typical life of people who are not following any type of moral code. I wasn’t living a correct life. And I had become disenchanted with how life was going. I began to question myself: why was I doing the things I was doing? I looked at my three children and didn’t want them to grow up wrong. My family was Christian but I never saw them go to church. I always believed in one God, so I asked to be guided to the Truth.’”

The next day on her way to work, Reed exchanged greetings with a man on the sidewalk. She later discovered he was a student at the law school where she worked. He came into her office, the two remembered each other, and he began to tell her about about Islam.

“I asked him questions: Why were we created? What was the purpose of life? His answers began to fill a void in me. I fell in love with what he was telling me, the knowledge – not him. He was just an instrument that guided me to Islam.”

Two months later, Reed became a Muslim. She changed her name to Najah Siddiq and taught herself how to pray. In 1979, Siddiq was practicing Sunni Islam when she learned about the revolution in Iran.

“I had a lot of Muslim friends and we all knew this was a true revolution but we held on to our Sunni beliefs. Some went over to Saudi to be educated, and this put doubt in their minds about the Shia.”

After the revolution, Siddiq began to attend programs at the Islamic Education Center in Maryland.

“It felt so alive. There were lots of speeches, and I took my children every week. This experience opened my eyes more.”

Siddiq says she doesn’t know how she got invited to Iran. Others in her group were public speakers. But she felt like Allah invited her there to be a witness.

“Meeting Imam Khomeini reminded me of the covenant we made to Allah before we came into this existence, when we were in a pure state. That this life is a journey, and we should strive to do those things that will get us back to that pure energy so that when we go back to Allah (swt), we’ll have that purity forever in the akhirah (afterlife).” 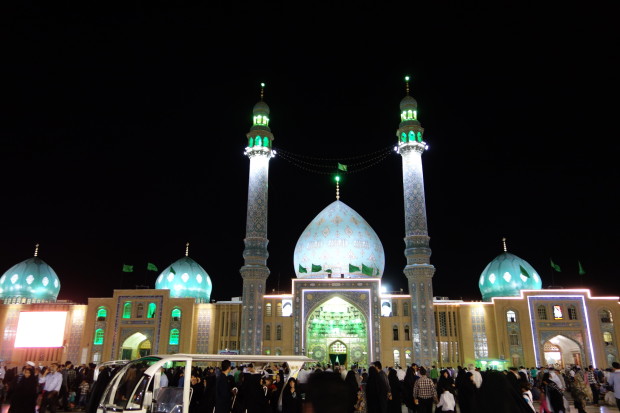 “In Iran, a very special place to me was Masjid Jamkaran. I had never heard of it until I read a book about it and I said, ‘one day, I’m going to go there.’ And Allah in His Mercy, invited me to the Islamic Republic that year, and we got to visit it. I’m one of those servants that Allah has to prove things to (laughing). Imam Zaman, that’s his place, and one day he’s going to come back and right the wrongs of the world.”

Q: What’s your favorite book by or about Imam Khomeini?

A: I really like this little piece Jihad al-Akbar, The Greatest Jihad: Combat with the Self because I feel like I was being spoken to. My life is ending without much improvement on my part.  May Allah (swt) continue to help, continue to guide and continue to have mercy on all of mankind. Ameen.

These are the Boots of the Soldiers of Imam Mahdi

Who could have filled these boots better
than our beloved Imam Khomeini,
But he has gone on to his destiny.

Allah (swt) sent our Imam to us for a time.
Will we adhere to his message,
or will we let it die with his passage?

These are the boots of the soldiers of Imam Mahdi.
Who will fill these boots –
will you or me?

How can we fill these boots,
when some of us have forgotten
our precious Islamic roots?

Allah (swt) tells us in the Holy Quran
to submit to His Will in Islam.

But some of us have forgotten
because we practice hate and racial prejudice,
not to mention injustice.

How can we fill these boots
when we do not love another
because of the color his face?

If this is what we call Islam,
we are out of the race.

Our Imam mentioned fighting racism
along with many other things in his will.

If we love him the way we say we do,
then racism will be still.

Since our Imam is gone,
and these boots are empty,
we must fill them; it is out duty.

Who will fill these boots,
will you, will I?

If we will not,
are we prepared to answer to Almighty Allah as to why?